My name is Karen Hanway,
I am the third owner in the same family. My paternal grandma bought the car new in the south side of Chicago. She optioned it up with a 350,Turbo Hydra-matic trans and air conditioning.  She quickly realized it was too fast for her as the ‘grocery getter’.  My dad flew to Chicago and they drove it to southern California. It became his commuter car.

Dad was a motorman.  Growing up, I spent a lot of time in the garage as he worked on friend’s cars and boat engines.  Since he didn’t have a son, my sister and I were often asked to hold this or that, and pump the pedal to bleed the brakes.  He would ask, “Is it up or down?” I always wondered why he didn’t know?

Over the years, my three sons would spend a lot of time in grandpa’s garage in Fullerton, working on projects and all things mechanical. He taught them automotive basics. Of course, this included how to do burn-outs.  He also let them drive the Nova to their High School dances.  Their big disappointment was in 1999 when dad bought a crate 350 from Kragen, ending their hope for a hot rod.  Two of my sons have asked me who gets the Nova.  I don’t have an answer to that question yet.  Since they live in Virginia and Alabama, I think it may be the one with the largest, climate-controlled garage.

In 2001, Dad was T-boned.  He had a mild concussion.   Due to his strong emotional attachment, he said hello to a salvage title and had the car repaired.

I inherited the Nova in 2016.   I named her Plain Jane as a result of going to Cars &Coffee in San Clemente.  I would hear comments like, 'kind of a sleeper', 'close to original', 'a stock ride', Plain Jane seemed to fit.   In 2018, I met Denny at the Dog Show in SJC and started going to Monarch Bay Plaza on Saturday mornings.  I am thrilled to be a new club member.  I have met some amazing people who love cars like I do and enjoy spending time together surrounded by fine American classics.  I love being a Car-Chick and the Nova Lady.  AND, I am very sure my Dad would have enjoyed this club.

PS. Just for fun, look at the engine picture. Can you find the Home Depot bracket, the coffee creamer bottle top and the incorrect air filter decal? 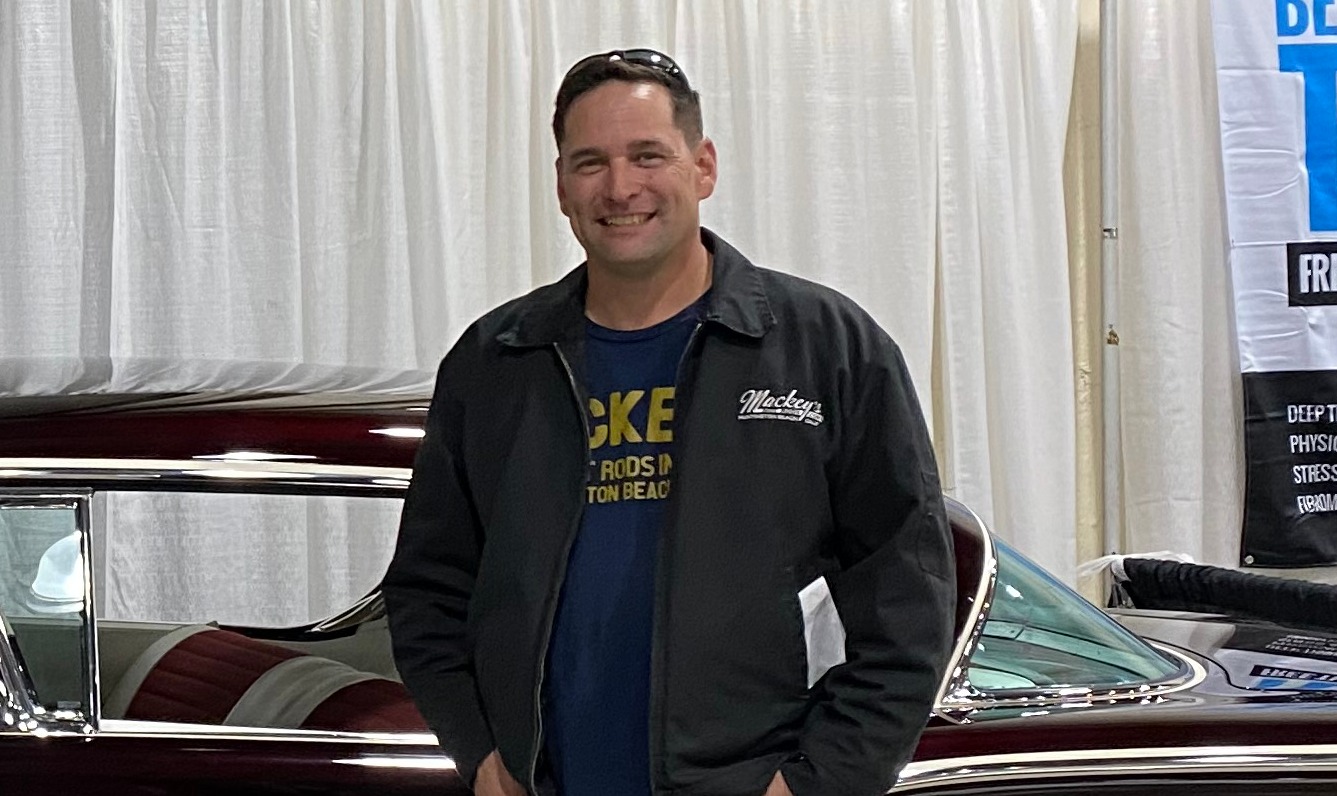 Jay Smith and His Great Story

My name I'm MSgt Jack M Smith (Jay), I am from Virginia just outside DC. I have been in the United States Marine Corps for 28 years. I think I've been in for so long because I'm a better Marine than I am a civilian, but that's not saying much because I'm an awful Marine. It may be because I'm thinking of cars 95% of the time, But as an infantry guy you don't have to be that smart, so that works out. My Marine Corps career has taken me all over the world to some really cool places and to some less than desirable of locations. I have real dislike for the desert!

My wife Jessica and I have been together for 18 years. Jessica is a patriot and the embodiment of a Marine wife. We meet in a bar downtown Washington DC, when I was in college. Jessica and I knew each other 6 months before the war kicked off and my reserve unit deployed for combat operations in Iraq. Jessica stuck with me, even after very limited contact for the 8 month deployment. After returning I knew I had a good one, so I married her and she has stuck through 6 more deployment, 3 of which were combat deployments. Jessica and I have two boys, Jack and Benjamin. Chances are, if I miss a Saturday morning it’s because I'm deployed, in the field, or my boys have a baseball game.

My car obsession started right about the time I was born and the doctors went to check my blood type, and found motor oil.  My father has always been a mechanic and a car guy. When I was 13 my dad traded 4 jack stands and stick welder for a 1958 Chevrolet Impala and that was the start of my love affair with the Chevrolet Impala. By the time I got to High School I had traded my 58 (big mistake) for a 1940 Ford and then traded that Ford to my Dad for his 64 Impala. Coincidentally, my dad still has that 40 Ford. I then got a 1963 Impala convertible to which I drove to 3 separate proms and in one homecoming parade.That car is sitting in my parent's garage in Virginia on jack stands, it's been that way since I left for the Marine Corps.

My first old car purchase I made on my own (no trades) was an all original 1926 Dodge Brothers 3 window. In 93 as a young E3 grunt with very little money, but I had a super cute girlfriend (dress blues work). One night a buddy of mine and I drank all her beer, I asked if she had more. She said sure it's out in the garage and 30 minutes later she had to come to find me. I had completely dug out the Dodge that was stuffed in the corner of the garage. The car belong to the original owner; her grandfather. I tried hard to talk her sister out of the car, to no avail. The girl and I went our separate ways only to bump in to each other in a DC Bar. First question was something to the effect of how's your sister and her car? 8 years after I first dug that car out I owned an untouched 1926 Dodge. That Dodge is sitting back at home right next to the 63 convertible. I got orders to Camp Pendleton in 2007 and somehow my family have been able to stay in California since then. I brought with me a 1930 Model A roadster, I loved that car.

Shortly after arriving here I found a 1955 Pontiac on base. I have set out to learn everything I can when comes to customizing a car, and I think I have gained in this endeavor. Some of what I have done to the car is to put 56 Buick taillights and adapted the bumper to fit the new taillights, I am also changing the car from a 4 door to a 2 door sedan. I am really enjoying this processes because it's all my work, and course friends come over and offer a helping hand.

So after crashing my roadster, my neighbor found me a derelict 1958 Impala in Huntington Beach that had not been touched for 20 plus years. After getting it home my father and I got it running within an hour. I started to restore it myself, but after deploying once and more deployments on the horizon I let a professional finish it for me, so Denny helped me get it to Mackey's Hot Rods in Huntington Beach, a block from where it was found. Well you all can see the outcome.